Israel, Palestine and the Forgotten Fate of Batis of Gaza 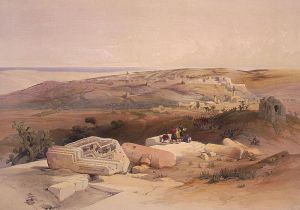 There were no Jews in Palestine before Zionism.

There are no real Palestinian people.

Modern Jews are Eastern European, with no real link to Israel.

Israel dealt with the residents of the Palestinian region peacefully and humanely in 1948.

What does it matter?

It’s been a while since I’ve been able to revisit this little blog due to a tremendous amount of work, but a new semester and current events have inspired me to write again. What has especially inspired me to write again is the lack of historical understanding that I’ve witnessed in social media, the press, and in the arguments of many people that I hold dear. A new semester is coming soon, and I’m anxious to see what the next group of students know—or don’t know – about the history of Israel and Palestine.

The four statements above were written by educated people. All are false. All are worthy of discussion. The British Mandate is rarely mentioned in our current Israel vs. Palestine situation. No one knows what the Hasmonean Dynasty was, but they may recall the name “King Herod” from Nativity stories at Christmas. The Arab invasion…yes, the Arabs invaded the area in the 7th century, introducing Islam. They lived on the fringes and served as mercenaries, but they didn’t occupy the area that they now do. And Crusaders aren’t just a Medieval fantasy, but existed as a formidable European force which pushed out the Jews and Muslims from the area they now fight to control.

We find some of the earliest remains of human settlement in this highly contested area, and this contested area is one of the first areas where we witness human creativity: the ability to experiment with crops during the Neolithic revolution, our first stabs at artistic expression, a connection with the Holy before there was a God of Abraham, and some of our earliest burials, showing that we cared about our dead and wanted them remembered. We also find some of the earliest examples of conquest: Egypt built forts and garrisons here, the Akkadians, Assyrians and Babylonians wiped out populations here, the Sea Peoples – Greeks before there were Greeks – destroyed many towns and repopulated others.   The Persians brought back those exiled during earlier periods, including the Jews, who rebuilt their destroyed temple in Jerusalem as others rebuilt temples and shrines to their deities, gods and goddesses such as Ba’al and Astarte, who the people invoked long before they invoked Allah. Alexander the Great marched through this terrain and the Roman general Pompey annexed it for Rome, but this was ancient land in Alexander and Pompey’s day.

It does not surprise me that most people don’t understand the history of this region. It’s an old, complicated, multi-layered history. It is important to remember, however, that history is never easy, and that it is futile to bring up one event in history and not the events which precede it. Our discussions on Palestine and Israel don’t go deeply, because to go deeply means to become tangled in over 8,000 years of struggle.

It also means to admit that a good deal of history isn’t written, and even when it’s written, it’s forgotten. This is why I’m remembering Batis right now. Batis was a commander – or maybe a governor – or maybe just a eunuch who oversaw Gaza for the Persian Empire when Alexander invaded in 332 BCE. Alexander just besieged Tyre after a six month siege, and met with resistance at this heavily walled town on his way to Egypt. Batis refused to surrender Gaza. Alexander broke through the Gaza walls, massacring all of the men of Gaza and selling the children and women into slavery.

When it came to Batis, Alexander, angered by his defiance, pierced his ankles and dragged him by those pierced ankles to death.

Batis is barely a footnote in the histories of Alexander’s campaigns, and he is largely forgotten today.   To my knowledge, no one has ever chosen him as a theme for a painting or sculpture.   I’m willing to bet that even the proudest resident of Gaza doesn’t know Batis’ story.

And yet, Batis lived, died horrifically, and Gaza fell, only to rise again as a Greek polis. The Jews in the area (yes, they were here, too) would also face the onslaught of the Greeks, and their heroes would fall, and Jerusalem would fall and rise again, too.

I don’t know if remembering Batis and history will stop the carnage we witness today from all sides, but it can offer some consolation that we’ve been here before. We’ll be here again. We can, at least, remember that.

Note:  the painting above is David Roberts’ painting of Gaza, 1839.