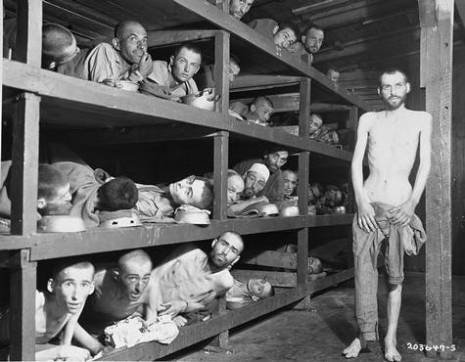 This has been a very busy semester, so I haven’t been posting very much here.  However, sometimes things come up in classes which warrant intense discussion, and I wanted to explore these issues in a different way.  Unfortunately, today’s college classroom may not be the place for intellectual discussion anymore.

Often, my college students will offer statements such as “I have a right to my opinion and I don’t think that the Holocaust happened.”  When asked why not, there is never any concrete rationale, just the idea that it didn’t happen because they think it didn’t happen.   When I bring up the disappearance of 8 million, the photos, the graves, the concentration camps, the paperwork, the eyewitness accounts on both sides, the artifacts and the statements of those who worked in the camps, the students usually shrug and say, “well, people still believe what they want.”

At what point did we agree that we can believe what we want, regardless of evidence to the contrary?  I am reminded of the Church father Tertullian’s statement: Credo quia absurdum (I believe even though it is absurd).  Tertullian was discussing the mystery of Christianity for the believer, not historical facts.   This concept, fideism, really comes up with religious faith only, and often religious faith when crossed with scientific proof.   Certainly da Vinci understood this concept when faced with scientific realities contradicting Biblical statements.

When it comes to the Holocaust, we could cite anti-Semitism as an easy cause, and we could cite Nationalism when it comes to other examples of belief and history (that there was no Armenian genocide, for one example).  Racism also figures in this (that American slavery was a benevolent system, that people of color are inferior to white people, etc).

What I see from my perspective as a professor is different:  it is belief because of something heard “somewhere” and then believed.

Even the most fervent Holocaust denier will offer statistics to support his theory.  The Turkish Nationalist will also cite reasons for  denying the Armenian genocide (that it was World War I, there were deaths on both sides).  The White Supremacist will cite “scientific” studies supporting racial inequalities.  We can debate the authenticity and accuracy of these sources, but sources are still provided.

Today’s student will not provide sources.  Opinion is enough.

The “deniers” are also passionate about their case.  The students I’ve encountered have no agenda.  They have picked up a belief, held it, and have gone on to accept it regardless of evidence.  Not only is this acceptable to the student, but this is also acceptable to his peers.  When the danger of this belief is pointed out by other peers and by teachers, the student simply shrugs and continues in belief.

Do we blame the decline in humanities?  Critical thinking skills lost to test taking strategies in our schools?  The openness of the Internet, which provides unfiltered information to those unable to filter?  Charismatic figures who spout statements without sources?

And how can we teach history in this new world?

One student recently brought up the reality that today’s student isn’t asked to explore these ideas.  These are test questions, where there is no room for critical thinking.  They can define holocaust for a test, but can’t explore the moral dimensions.  By exploring the many dimensions of history, we begin to understand more than “what happened.”  We separate fact from opinion.   If we take history seriously, we won’t be able to rip out the parts we don’t like and we strip way fantasy.  And if we take history seriously, we are less apt to repeat the great tragedies of history, such as the systems of slavery and the mass extermination of people.

By the way, the Holocaust happened.

This entry was posted in Uncategorized. Bookmark the permalink.

One response to “Belief and History”